Please do not stop the project at 1810 N Wells St. as outlined by Block Club https://blockclubchicago.org/2020/12/02/after-city-strips-landmark-status-for-old-town-stable-alderman-tries-new-tactic-to-block-condos/ and Crain’s https://www.chicagobusiness.com/commercial-real-estate/old-town-apartment-project-faces-new-obstacle. The first reason to allow this project to move forward is that it would be a valuable addition to the neighborhood. The second reason is to help Old Town do its’ part to slow displacement in less well off neighborhoods around the city. I’ll go on to discuss the foolish and damaging opposition to the project. You should not let a small, often malicious, group of homeowners prevent progress in your ward.

This project would turn a parking garage into housing while preserving the facade. Housing is a much better use of space in dense walkable neighborhoods like Old Town than parking. The new residents will patron the local shops and restaurants. In a post pandemic world our local spots are going to need all the support they can get.

The next reason to allow this already approved project to move forward involves thinking of Chicago as a more complex system. We are a city of neighborhoods. We are also a city that is creating and attracting high paying jobs. The wealthy folks who fill these jobs need places to live. People move from neighborhood to neighborhood and the policy of one place affects the outcomes in other places. It is good that Chicago is able to attract high level talent, but this comes with it’s own problems.

Neighborhoods like Pilsen, Woodlawn, and Logan Square are experiencing displacement as wealthier folks move into these neighborhoods. The wealthy used to look in Old Town, Lake View, and Lincoln Park, however, these neighborhoods are not building enough units to accommodate the influx of population. Old Town needs to build its fair share to slow displacement in other neighborhoods. I ask you, if you block those 18 units where will these wealthy folks go? I’m not asking sympathy for the wealthy, I’m asking you to consider that those 18 households will find housing either by bidding up prices in Old Town, or by displacing residents in Logan Square, Woodlawn, or Pilsen. Of course 18 units isn’t going to stop gentrification, but I want to plant the seed of the idea that housing policy in wealthy white Chicago affects the rest of the city. We need to build more housing in wealthy neighborhoods, at the very least, do not block a good project like this one.

Changing gears, the next reason is obvious and clearly stated in the Block Club article. Bluntly, this structure doesn’t have historical significance.

The unanimous votes are from experts in this field. It is important that we, both as a city as well as a society at large, listen to the experts. We should not let the opinions of dilettantes dictate public policy.

Which brings us nicely to the second reason, those that are opposed to any change in Old Town. There is a militant faction of Old Town residents that are not very good neighbors. Consider the recent harassment the Deakins family has been subject to for trying to modify their garage to accommodate their hanidcapped daughter. Block Club again: 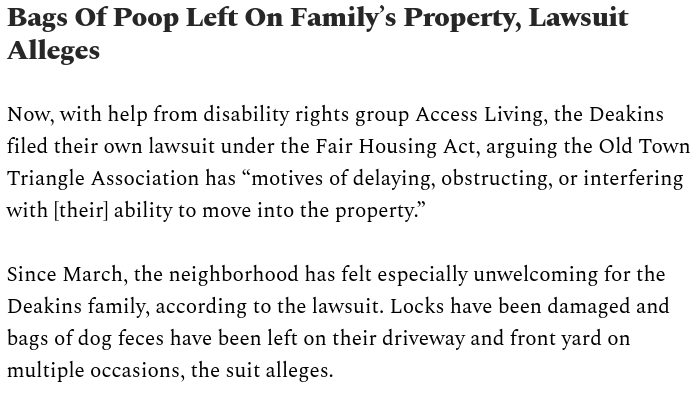 Neighborhood associations should welcome new families. This kind of harassment is ugly and uncalled for. We need our leaders to send clear messages to groups like this that it is not okay to harass your neighbors. Unfortunately, any effort to placate these people or groups will only embolden them. Now it is bags of dog poo and petty vandalism, maybe next time they will throw bricks through windows? I believe that the same folks upset with the Deakins are the same that will stir up frivolous preservationist claims to stop any changes to their neighborhood. We cannot let city property rights be dictated by bullies. It’s important to remember that in the too recent past whit residents used firebombs to intimidate African Americans and Puerto Rican families from moving into white neighborhoods.

Once again, please do not stop development because a small group of households are using bad faith preservation arguments to prevent housing. The implications go beyond your ward and I ask you to consider the ramifications of not building housing in well off wards.

View all posts by chiyimby